About Women and Gender Studies

As a department, we seek—in our research, teaching and community building—to explore both gender’s embeddedness in current forms of injustice as well as its past and emergent potential for transformative politics. Both Bachelor of Arts and Master of Arts programs are offered, as well as courses for general electives and for those minoring in Women and Gender Studies.

Although San Francisco State University (SFSU) has offered classes relating to women's studies since 1971, it wasn't until 1976 that the Department of Women and Gender Studies (WGS) was founded, becoming one of the first such departments in the United States. Forged out of transformative activism and scholarship, the department uses interdisciplinary approaches and foregrounds transnational and intersectional relationships among gender, race, sexuality, nation, labor, technologies and globalization. Our students engage in challenging academics, work closely with professors, and lead community initiatives. Faculty typically teach three courses per semester (though competitive awards of release time for research are often available), maintain an active research and publishing profile, and advise undergraduate and Master’s students in the department. We encourage intellectual collaborations within the department, as well as across the profession, and also support applications for internal and external funding to support research productivity.

WGS examines the power relationships between gender formations and political economies, cultural productions and embodiments. Understanding gender as co-constituted with race, class, sexuality and nation, the department deploys an interdisciplinary and transnational methodology to build feminist archives, conversations and tools for social justice. In developing and communicating its understanding of gender and power, the department pays particular attention to insights from critical race and postcolonial studies. Viewing the production of knowledge about gender as itself political, the department seeks --in its research, teaching and community building-- to explore both gender’s embeddedness in current forms of injustice as well as its past and emergent potential for transformative politics. 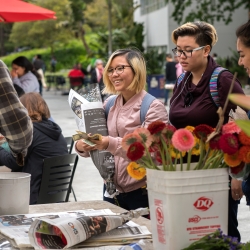 Students and faculty in the Department of Women and Gender Studies study the power relationships between gender and politics, particularly the politics of knowledge, culture, economy, medicine, science, citizenship, immigration, militarization and the body. We take up interdisciplinary and transnational methodologies to examine how gender is co-constituted with race, sexuality and nation. We explore gender’s embeddedness in current forms of inequity and oppression as well as its potential for a transformative politics. Our goal is to collectively build feminist conversations, archives and tools for social justice.

Email us today at wgsdept@sfsu.edu so we can answer any questions you may have!

Located in Humanities 316, this space is usually available for study and small social gatherings, Monday-Friday 9-5. It is currently closed due to COVID-19 restriction.

The resource room also has a refreshed (non-circulating) library, with many current course texts and books of interest to WGS students.

For more information about the history of our department, view these historical and celebratory documents.

Thursday 9-5 in person; all other days by email
Check Advising page for advisors